Brainstorming in the dark: Turning out the lights for Earth Hour 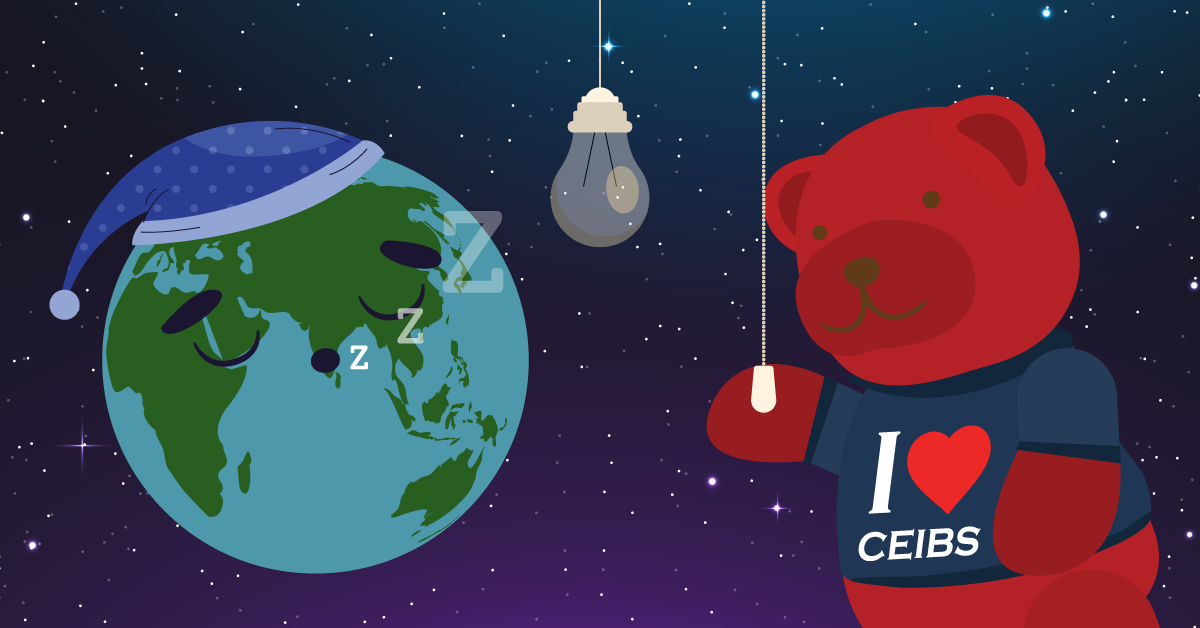 March 26, 2022. Shanghai – Every year in late-March, Earth Hour asks participants to turn off their lights to promote awareness of environmental issues. Organised by the World Wide Fund for Nature (WWF) and first held in Sydney, Australia, in 2007, the event has spread across the globe as businesses, individuals and world famous landmarks (such as the Pyramids of Giza) have gone dark to help encourage conservation.

In 2021, people in 192 countries and regions around the world tuned in to Earth Hour events featuring celebrities and artists such as Sofia Vergara and Armin Van Burren, with support from global organisations such as UEFA (the Union of European Football Associations) and the United Nations. Earth Hour has been described as “More than just an hour for Earth – it’s a movement for our own futures, for the benefit of people and planet.”

In honour of Earth Hour 2022, we ask CEIBS faculty for their thoughts on the event, the issues it raises, and suggestions for moving towards a more sustainable future.

How can we balance economic growth against carbon emissions reduction?

In my opinion, unfortunately, the notion of balancing trade against economic growth is a little bit of an oxymoron. From the point of view of an individual country, you can maintain a green economy and just import goods which typically create pollution during the production process from elsewhere. But from a global perspective obviously that doesn’t solve the problem.

In today’s fractured world, how should we approach the question of protecting the planet?

Environmental protection and economic imbalances are global issues. Trying to solve these at the national level is simply a case of putting a square peg into a round hole – it just won’t fit! I believe this situation calls for nations to come together for the common good, and for the betterment of the whole world.

Is one possible upside of slowing globalisation the reduced environmental impact created by the shipping industry?

This is also about whether we consume less energy. I think it is possible, but at a very shallow level, because we must also understand that if we are not going to import goods, then we have to produce them ourselves. A particular country may not be good at producing a certain item on its own – it may be inefficient – so that would mean it is actually utilising more resources to produce something it is not good at. This is, after all, the reason why international trade is seen to be good, because it basically enables the most efficient producer to manufacture what is required. So, yes, on the one hand, you can reduce goods moving from one country to another, but, on the other hand, you are going to waste resources producing something you are not good at.

How can business educators contribute to conservation?

Business education in general can play a critical role in supporting conservation-related initiatives such as Earth Hour, because our discipline can help companies incorporate environmental goals and concepts deeply within their company cultures via organisational behaviour theory and teaching. I believe Earth Hour can provide everyone, especially companies seeking to show leadership in vital areas such as environmental awareness, with an opportunity to spend these 60 minutes focusing on new solutions to this most pressing of issues.

How can organisations incorporate environmental goals into their daily operations?

In recent years, businesses have evolved to take a wider view of what their purpose is, beyond their traditional function of generating profit. Getting on board with projects which support serious issues such as environmental protection is an appropriate direction for many companies to move in. This will not only benefit how companies are perceived externally by the outside world, but will also send a positive and progressive message to their own employees. In short, it’s an opportunity for companies to show leadership.

Can a cashless society help industry reduce carbon emissions? A common criticism of cryptocurrencies is that they use large amounts of electricity to run their networks. What other solutions can the accounting world offer to reduce the environmental impact of payment systems?

As for cryptocurrencies, it's hard to imagine that they will become a mainstream payment method in the foreseeable future. Bitcoin, for example, is already more than a decade old, but there is very limited use for it in day-to-day payments. I also think that, as the technology evolves, the carbon footprint of cryptocurrencies will decrease because it is in the interest of cryptocurrencies themselves. Their large footprint is currently based on the large amount of energy that they use, which makes processing them expensive. Market participants are keenly interested in reducing processing costs and will therefore try to reduce energy consumption associated with cryptocurrencies. However, we are not there yet.

What are your personal views on initiatives such as Earth Hour? Are they useful? Or are they only short-term events with limited impact?

I think these initiatives are useful insofar that they increase awareness, which is the first (and a necessary) step in helping people change their behaviour. In this sense, Earth Hour has a real impact. Awareness by itself is not sufficient, however, and only long-term behavioural changes can bring about a lasting impact.

What can the academic world do to make a real contribution to sustainability?

I think that my job as an academic is to help students and non-academics appreciate the possibilities for positive change while also recognising that there are limits. In my view, many people enter a state of denial when they realise the enormity of the tasks involved in mitigating climate change. Other people may try to accomplish everything at once and contribute to a sense of anxiety. My personal opinion is that neither of these two reactions is a feasible path that will help humanity deal with climate change. In fact, humans will almost undoubtedly be unable to revert climate change entirely, but will almost certainly be able to mitigate its impact and limit its destructive consequences. Acknowledging this reality will help start a meaningful conversation about long-term consequences that we as humans can live with and the behaviours that we need to adjust to get there.